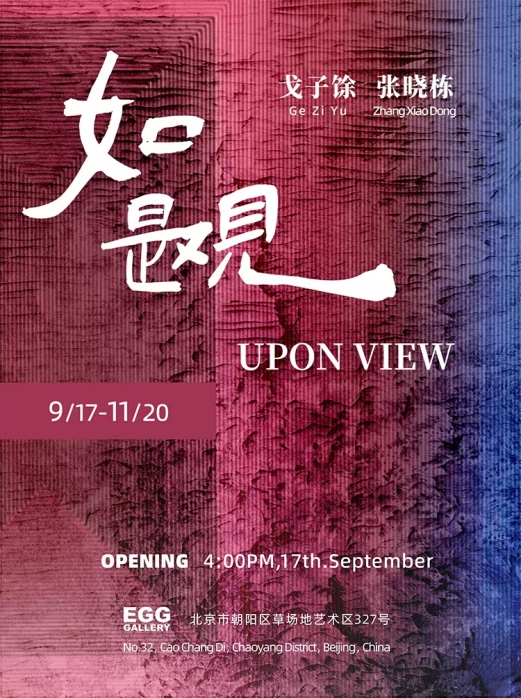 EGG Gallery is pleased to announce the two solo exhibition "Upon View" by artists Ge Ziyu and Zhang Xiaodong. They will be on view from September 17, 2022 to November 20, 2022. This exhibition will present the new works of these two artists in recent years, and communicate with each other through art in the "view".
"View", as a subject verb, is an epistemological perspective that suspends the essence, and belongs to one of the three major philosophical domains. It emphasizes the refusal of the reality of “noumenon” and only explores knowledge itself (a theory of "how to view"), and makes "view" an epistemological game that represents the world. This kind of world outlook suspends the question of essence:   in the East, it has evolved into consciousness-only-ism; in modern times West, the existence of "concept" is considered to be prior to essence. But they show the same result in different ways: different ways of "viewing" determine the appearance of different representational worlds.
Artist Ge Ziyu, with the cold abstraction of light perception sequence, shows us the virtual and real realm of "view", and opens up the depth of "view" pointing directly to the physical properties of light and shadow in the multi-dimensional transformation of mind and nature between subjectivity and objectivity image space. Zhang Xiaodong, an artist who is the intangible inheritor of the dragon scale costume, discovered the infinitely changing world contained in the flipping and agile "pages" in the complex and sophisticated practice of royal binding in the Tang Dynasty, and merged it with the theme of Eastern religious paintings to create a new world of "book pages", with the aim of open up new ways of seeing spiritually.
The two different "views" both show the artistic direction of measuring the world from an oriental perspective. Bypassing the suspension of ontological agnosticism, it also turns "view" into a kind of “pure”, a kind of "as is-ism", opening and releasing the individual -centered view that leads to the spiritual realm and the world of representation. Art works as a kind of connector based on the senses and the soul, and artists Ge Ziyu and Zhang Xiaodong have jointly launched a fresh journey into the realm of "view".
--Black Box